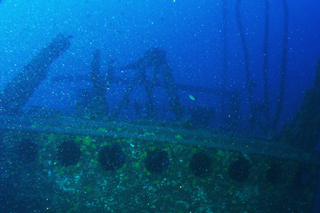 Korean fishing vessel abandoned by their owners at the docks of Puerto de la Luz. It shows a strange "epidemic" that occurred in the Puerto de la Luz and Las Palmas during the last decades of the twentieth century, when many boats forgotten by their owners ended their days moored at the docks and became old floating hotels, applicants artificial reefs submarines. It went to the bottom in 1979. By the depth to which it is (55 m.), difficulties in immersion are many.

Appellative: Chinese on the seabed