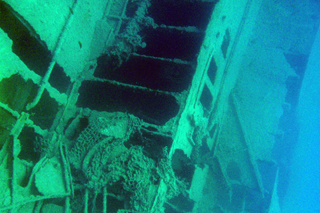 It was once a powerful Soviet trawler fleet in the eastern Atlantic. Sunk since 1977 in the outer harbor of Port de la Luz and Las Palmas, between the approaches of the many ships entering and leaving. In very good condition, it is perched on her starboard side on a sandy bottom. It is a simple and comfortable dive.